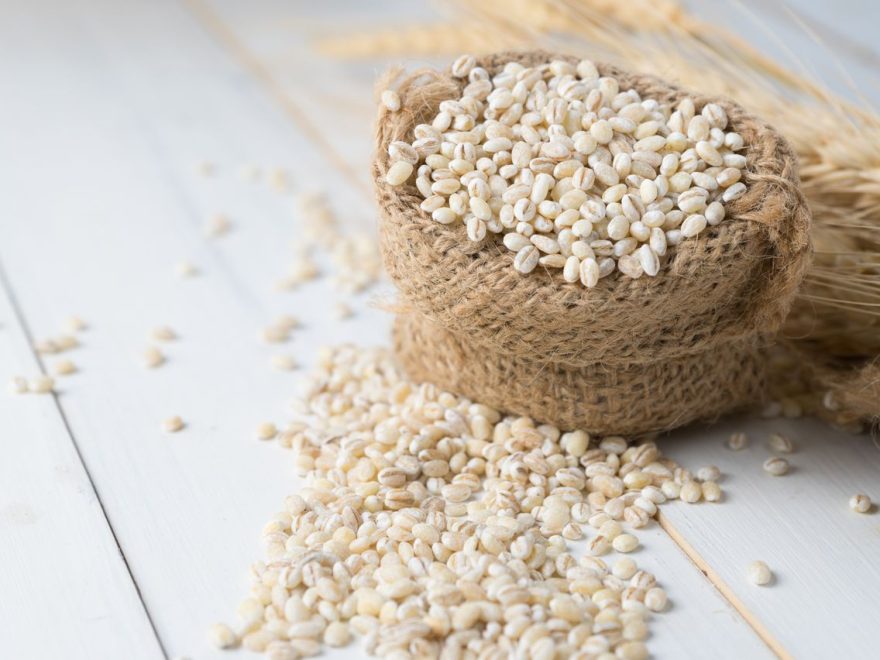 Barley is a cereal plant of the Poaceae grass family. Barley is the fourth-largest grain crop grown globally, after wheat, rice, and corn, and it is suitable for harvest in various environments. Its scientific name is Hordeum vulgare. Barley has several unique features among crop plants and is an essential crop in modern agriculture. It is a crop used both for human nutrition and for animal feed.

Barley also plays a vital role as an experimental model plant allowing advances in plant genetics, plant physiology, plant pathology, plant biochemistry, and, more recently, biotechnology. In addition, it is versatile, and you can use it to make bread, soups, stews, and health products. Interestingly, it is also a source of malt for alcoholic beverages.

In ancient times, people used barley as currency. Evidence shows its cultivation dated to 5000 BCE in Egypt. It also plays a significant role in Ayurveda. The ayurvedic term for barley is Yava, the only grain mentioned in the ancient Indian writings.

This article will guide you through everything you need to know about barley.

As per USDA, 100g of barley serving contains:

Barley has many health benefits because of its nutritional properties. It is rich in minerals, vitamins, and other nutrients. In addition, it contains protein, fat, and fibre. It also has a significant amount of iron, calcium, magnesium, phosphorous and niacin.

Barley is rich in fibre, which keeps you satiated for long and reduces hunger. As a result, it prevents excess calorie consumption, leading to weight loss. The soluble fibre in barley, known as beta-glucan, forms a gel-like substance in the gut. It slows digestion and promotes nutrient absorption and fullness. Barley is low in calories and has an impressive amino acid profile that can help with weight reduction and management.

The high fibre content in Barley is also helpful in preventing constipation. Fibre adds weight to your food and makes it pass through the digestive tract easily. In addition, it enables the stool to pass easily. As a result, it improves the overall digestive process. It also increases metabolism and makes you feel light. Furthermore, fibre helps cure bloating in the stomach and boosts intestinal health.

Barley reduces the level of triglycerides, which are a type of fat found in the blood. In addition, barley contains insoluble fibre, which reduces bile acid secretion and gallstone formation. Research shows that supplementing concentrated barley fibre sources minimises the frequency of gallstone formation. These gallstones are solid particles forming in the gallbladder, producing bile acid. Fibre also prevents fat absorption in the body.

Reduces the Risk of Heart Diseases

Barley contains flavonoids, substances that help protect against heart disease and cancer. Barley has the highest amount of flavonoids. As a result, it lowers risk factors like bad cholesterol levels (LDL), and blood pressure levels. A reduction in these factors reduces the risk of heart disease. In addition, phytochemicals in barley called Tocols have antioxidant properties that reduce the risk of stroke. Studies prove including whole grains like barley and oats reduces cardiovascular disease outcomes.

Barley is rich in magnesium, a mineral essential in insulin production and the body’s use of sugar. Studies indicate that magnesium can lower the spikes in blood sugar levels. As a result, consuming barley can reduce the risk of prediabetes and diabetes type 2.

Evidence in-vivo studies show that consuming barley prevents the risk of colon cancer. The fibre content in barley plays a vital role in preventing cancer. The insoluble fibre in barley helps reduce the time to clear the gut, which is protective against colon cancer. In addition, soluble fibre binds harmful carcinogens in the gut. Compounds like antioxidants, phytic acid, phenolic acid, and saponins protect against cancer.

Barley’s abundance in phosphorous, calcium, copper, magnesium, and zinc improves bone health and strengthens them. Zinc plays a role in mineralising and developing bones. Whereas calcium, copper, magnesium, and phosphorous are essential for maintaining a strong skeleton system. Vitamin C in the barley also plays a role in the healthy development of bones.

Barley has a high amount of vitamin C, antioxidants, and minerals. As a result, it reduces oxidative stress and promotes healthy skin. Zinc promotes a healing effect on the skin. Barley is also rich in selenium, which prevents skin elasticity. It tightens skin and eliminates toxins from the body.

Antioxidants in the barley help make your skin look younger. In addition, since it contains significant amounts of vitamins, minerals, and antioxidants to maintain healthy hair growth, it contains copper and iron, which reduces hair loss.

Best Ways to Include Barley in Your Diet

Barley is a versatile ingredient that you can incorporate into various dishes. It adds taste and nutritional benefits to your food. Some of the ways to use barley are:

Healthy Barley Recipes for You

You should store barley in airtight containers in a cool and dry place. It lasts up to one year. After that, you must keep cooked barley in the refrigerator, and one should consume it within a week.

Barley is essential in Ayurveda because it is a cooling diuretic and the ideal Kapha grain. In addition, barley has high insoluble fibre content and regulates blood sugar levels. Hence, it slows down the absorption of glucose.

Barley consumption lowers fasting glucose levels and reduces spikes in blood sugar levels after meals. Furthermore, it increases the release of bile from the liver and gall bladder, aiding fat metabolism. Bile is an oily substance, and the release of bile directly lowers triglycerides and cholesterol in the blood.

The high fibre content keeps you fuller for longer.

Barley is called Yava in Ayurveda. Ayurveda considers barley to be a strength-promoting grain that alleviates vital Kapha dosha. It also suggests that barley helps manage weight. It is light to digest and Ruksha (drying), making it great in ailments where we see excess Kleda (moisture). Excess Kleda (moisture) can lead to diabetes, obesity, high cholesterol, and most Kapha disease.

Barley is a good source of fibre. However, it may cause intestinal gases due to the beneficial bacteria in our colon. Therefore, excess consumption of barley water may upset the stomach. It may also interact with certain medications. The stomach irritation can come with minor and major symptoms like pain, cramps, bloating, and even loose intestinal problems or diarrhoea. In addition, drinking too much barley water can cause chronic constipation. In several cases, constipation may lead to rectal bleeding with acute pain.

An allergic reaction to barley is common. If you suffer from allergies, limit your consumption. Common symptoms include rashes, inflammation, hives, irritation, and swelling of eyes, eyelids, nose, arms, legs, and even anaphylaxis.

The benefits of barley are no secret. Barley is a very healthy and nutritious grain. It is rich in vitamins, minerals and other plant components. It is high in fibre and responsible for health benefits, better digestion, reducing hunger, and weight loss. Including barley in the daily diet prevents chronic diseases like diabetes, heart disease, and certain types of cancer. Many kinds of barley offer fantastic health benefits. It is also a healthy grain as per Ayurveda. Therefore, incorporating barley into your diet will assist you in living a healthy life.

Q. What does barley do for your body?

A. Barley is a nutrient-rich grain that offers several benefits to the body. For example, the fibre in barley aids digestion and also helps lower cholesterol levels. Barley can also reduce blood sugar levels and prevent diabetes. Barley can also help lose weight. Besides its versatile usage for cooking, it also offers benefits to the skin, improves bone health and promotes heart health.

Q. Is it ok to drink barley every day?

A. Barley water is a delicious, simple, and refreshing way to get a hearty dose of fibre, vitamins, and minerals. While drinking barley water can strain the digestive system, drinking it 2-3 times a week can help lose weight and avoid diabetes and heart disease.

Q. What are the side effects of barley?

A. Excess intake of barley water may cause adverse effects. It may cause intestinal gas, stomach upset, constipation, rectal bleeding, and allergic reactions. In addition, its gluten content may cause issues in people with celiac disease.

Q. Who should not take barley?

A. Patients suffering from irritable bowel syndrome (IBS) or gluten intolerance or have a sensitive digestive tract should avoid barley. In addition, since barley strongly affects blood sugar levels, you may want to exercise precautions while consuming it if you have diabetes and take any blood sugar lowering medication or insulin.

Q. Is barley alkaline or acidic?

A. A pH scale measures from 0 to 14. Something alkaline is greater than 7pH. Barley is acidic. Uncooked raw barley’s pH ranges between 5.0-5.3. However, once digested, it has 4.5 pH, making it acidic.

Q. Which is better, oats or barley?

Q. What happens if we drink barley water daily?

A. Unstained barley is delicious, simple, and refreshing, a way to get a hearty dose of fibre, vitamins, and minerals. However, too much barley water can strain the digestive system; drinking it 2-3 times a week can help you lose weight and avoid diabetes and heart disease.

Q. Can I drink barley before bed?

A. Certainly, barley is safe to drink before bed since it contains amino acids, melatonin, and tryptophan and provides quality sleep. In addition, barley tea does not contain any caffeine, so it is safe to have it before bed.

Q. Is barley healthier than rice?

A. Barley is healthier than white rice. However, barley and brown rice both have immense health benefits. If you are avoiding gluten, brown rice should be your go-to food since barley has gluten. In addition, brown rice has a higher folate and vitamin E content, whereas barley has enough fibre and calcium.

Q. Is barley better than quinoa?

A. There is not much difference. Quinoa is very healthy, and barley also holds its benefits. The nutritional content shows quinoa is high in protein while barley is high in fibre. Quinoa is considered a superfood and is nutrient-dense compared to barley.

Q. What are the benefits of eating barley?

A. Barley is rich in many beneficial nutrients. It reduces hunger and helps prevent obesity. The insoluble and soluble fibre in barley improves digestion. Moreover, barley consumption can prevent gallstones. It helps in lowering cholesterol levels and reducing the risk of heart diseases.

Q. Is barley a superfood?

A. Barley has a rich nutritional profile and immense health benefits, making it a superfood. Barley grass is commonly available at health stores or markets. People often use it as a superfood and a supplement to boost weight loss, enhance immune function and support overall health.

Q. Why is barley not good for you?

A. Barley contains short-chain carbohydrates called fructans, fermentable fibre types. Fructans may cause gas and bloat in people with irritable bowel syndrome or other digestive disorders.