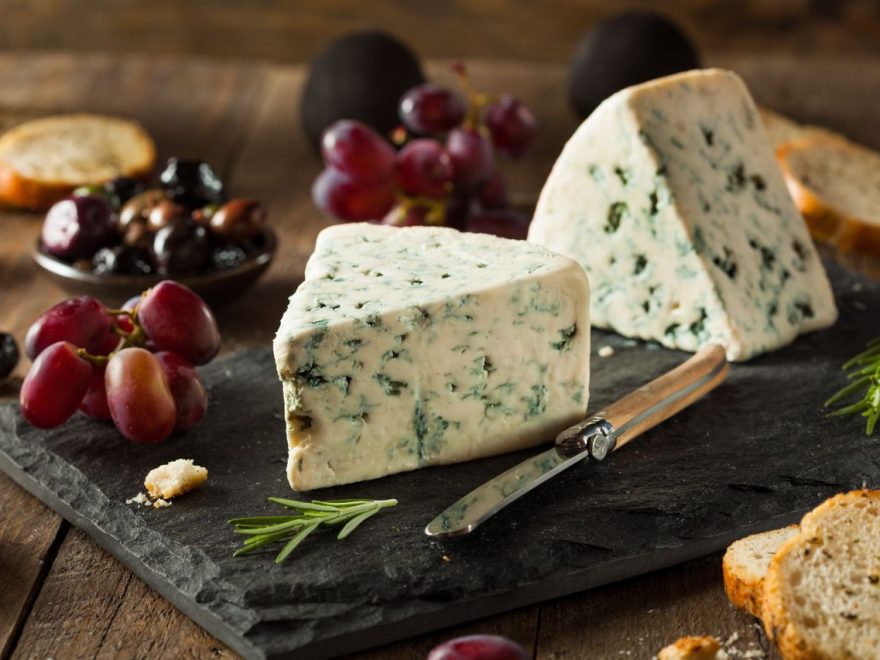 Blue mould cheeses are produced worldwide, with the four most well-known varieties being Danablu, Gorgonzola, Roquefort, and Stilton. The fungus Penicillium Roqueforti is used to prepare blue cheese, determining the appearance of the various types during ripening. The microflora, which includes both lactic acid bacteria and yeast, regulates this development, which is also affected by variations in water activity, salt content, and oxygen and carbon dioxide concentrations. As a result, they are cheeses that look like marbles as they have bluish-green veins.

Studies show Penicillium Roquefort is the fungi used in blue cheese and largely contributes to the blue colour in the cheese. Blue cheese often has a salty taste and can sometimes be sweet. It has a very soft, crumbly, and creamy texture, and you can eat them with fruits and nuts; one can also use them as vegetable dips; you can add them to sauces and put them in salad dressings. Blue cheese has a high sodium content and low-fat content.

Blue Cheese: How is it Made?

Following are the steps that you need to follow to prepare blue cheese.

Blue cheese dressing is a famous sauce made using blue cheese and is a much-loved salad dressing and dip.

As per USDA, 100 grams of blue cheese offers:

Blue cheese contains Penicillium Roqueforti, which has anti-inflammatory substances that are good for blood pressure and may limit cholesterol build-up. It also contains calcium, and without enough calcium in the body, bones become brittle and weak. Blue cheese can provide 10% of your calcium requirement. A small amount of blue cheese obtains one-fifth of an adult’s protein. Blue cheese contains vitamin A, Vitamin B2, Vitamin D, Zinc, and Phosphorus which are all good for the body’s functioning.

The inclusion of blue cheese in your diet may reduce your risk of cardiovascular disease. According to studies, those who consume blue cheese regularly have a decreased risk of developing cardiovascular problems than those who do not. In addition, blue cheese also aids in cholesterol reduction and prevents arterial inflammation and blood clots in veins or arteries.

As we become older, we have more health problems, one of which is arthritis. Blue cheese contains anti-inflammatory qualities and vitamin D that aid in reducing joint inflammation and the relief of arthritic pain. Blue cheese consumption lowers the risk of arthritis and aids in its treatment.

Osteoporosis is a disorder in which bones become so weak that even a minor fall can cause them to fracture. It affects women more than males. Blue cheese is rich in calcium, phosphorus, and vitamin D, which are essential for bone health. One ounce of blue cheese contains approximately 150 milligrams of calcium, which gets absorbed by the body due to vitamin D. Consumption of blue cheese thus promotes bone health and aids in the prevention of disorders such as osteoporosis. The phosphorus in blue cheese also contributes to strong bones and teeth.

Blue cheese-eating has been found in studies to improve the immune system. Also, blue cheese contains vital vitamins and minerals such as vitamin A, vitamin D, potassium, sodium, and zinc. In other words, it aids in illness prevention by giving us a healthy immune system.

If you detect any inflammation growing anywhere on your body, consult your doctor right away since you may be allergic to some of the elements used in the manufacturing of blue cheese.

This cheese has two key elements that may be allergic to some individuals. Milk and mould may cause allergies in some people, and the reaction to this allergy may result in irritation to your body. Doctors conduct the necessary tests to discover which product is causing the inflammation.

Milk is the most prevalent food allergy in both children and adults. Please note that the primary ingredient in blue cheese is milk. If you have a milk allergy, you must avoid all blue cheese products, including yoghurt and ice cream. Even small amounts of milk produce allergy symptoms such as vomiting, diarrhoea, nausea, skin rashes, shortness of breath, and chest tightness.

Mould refers to the blue specks found in blue cheese. If you have a mould allergy, eating blue cheese may cause it to flare up. During the spring, it happens through airborne spores. Mould spores induce eye irritation. In addition, if you consume moulds, it can trigger inflammation in other body regions, such as the gastrointestinal tract.

The best way to store blue cheese is in humid temperatures. However, it would help if you stored it correctly so that moisture does not get in it. When moisture gets trapped on the surface of blue cheese, deterioration of the cheese takes place, resulting in the formation of pinkish bacteria, which is inedible.

Ingredients that You Can Use

Sour cream and mayonnaise combine to create an exceptionally creamy dressing. Mayonnaise can be filling on its own. However, the addition of sour cream lightens the dressing slightly. If you’re used to simply using mayonnaise, try a little sour cream the next time.

You can use the blue cheese of your preference here (Roquefort, Gorgonzola, Blue Stilton, Cabrales, Danablu or Cambozola).

This dressing would last up to a week if stored in the fridge.

Blue cheese is a generic word for cheese made from pasteurised cows, sheep’s, or goat’s milk and ripened with penicillium mould cultures. This cheese has a salty, sharp flavour and a strong fragrance. It is frequently low in fat while being rich in sodium. In addition, blue cheese is high in protein, calcium, and phosphorus. Other factors to consider when distinguishing one blue cheese from another, particularly when it comes to taste is: the wetness in the curd, the strain of blue mould utilised, the amount of time before the cheese got pierced, and finally, the time allowed for the salt to be absorbed are all factors.

Blue cheese goes nicely with fruit and nuts, and it’s a great complement to various cheese boards. Whisk it into creamy sauces, dressings, and soups, or sprinkle it over salads as a flavour enhancer. It is essential to remember that blue cheese should be consumed within seven days once aired or unpacked. Moreover, there may be a mild ammonia odour after opening, but it should dissipate after five minutes. Finally, the bluish mould should be visible, but if you see a pinkish slime with brown edges, it has probably gone bad and is not fit for consumption.

A. Blue cheese is mouldy cheese as it is made from a type of mould known as Penicillium, which is responsible for the bluish appearance in the cheese. But this cheese does not cause alarm since mycotoxins are not produced and are safe for consumption.

A. Blue cheese is soft, crumbly, and creamy; though the cheese has a pervasive and penetrating odour, it is salty and has a sharp flavour and is sometimes sweet. Since taste description varies from one to another, it is sometimes said to have a strong, salty flavour and sometimes sweet-spicy; few claim it has a salty, nutty metallic taste.

Q. Is blue cheese good for your gut?

A. Blue cheese consumption improves gut health. Due to the presence of good bacteria like lactobacillus. It also has various essential nutrients which enhance gut health. It also aids in the management of visceral fat around the abdomen area.

Q. How do you eat blue cheese?

A. There are many ways to eat blue cheese, out of which a few are:

Q. Can you eat mouldy cheese?

A. Peeling off the mouldy part will make the rest of the cheese edible. Not all moulds are harmful. For example, blue cheese from the mould Penicillium does not pose a health threat. Moreover, moulds such as brie, Camembert, and P.candidum are safe for health. However, it would help avoid cheese made with not pasteurised milk as it might cause health problems.

A. Nothing excessive is good. Like all cheeses, it could add to the fattening factor if taken in excess since it is calorie-dense. But blue cheese is taken in the right amount; it could benefit the body.

Q. Which is better, feta or blue cheese?

A. Blue and feta cheeses are abundant in vitamin A, calcium, calories, protein, and saturated fat. In addition, blue cheese has a lot of potassium. On the other hand, feta cheese has more thiamin, riboflavin, and Vitamin B6 than regular cheese. Therefore, blue cheese is healthier if compared to feta.

Q. Can you melt blue cheese?

A. Yes, you can melt blue cheese completely. It does not take a very long time as well. Crumbling it first and then melting it makes the process faster. You can put it on pasta, potatoes, or meat. Dishes served with melted blue cheese are part of many restaurant menus.