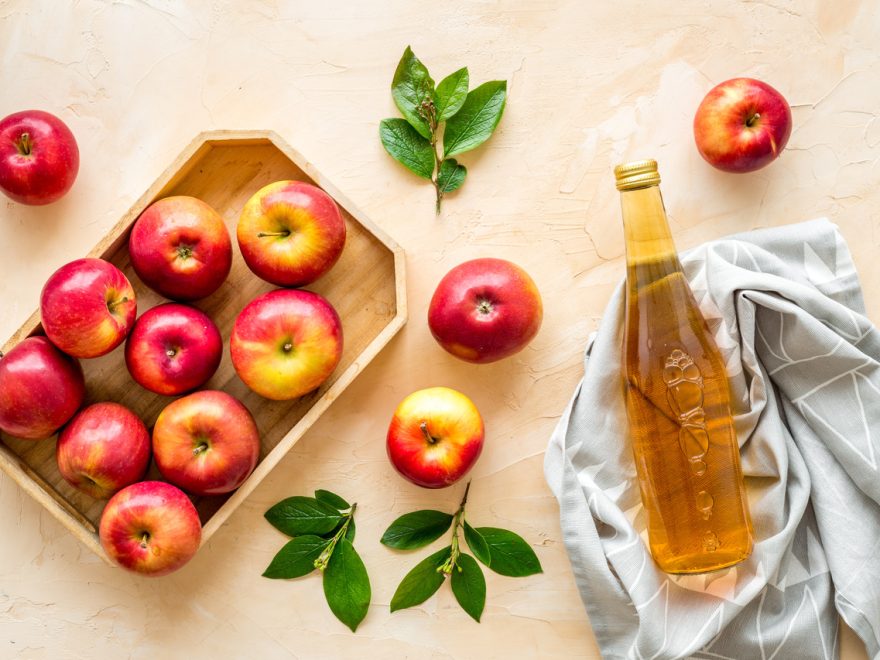 Like the famous adage “an apple a day, keeps the doctor away”, we can coin another: “an apple cider drink a day keeps the fat away”. We all know that apples are rich in vitamins, minerals, and antioxidants. So the offshoot, apple cider vinegar, has gained tremendous popularity among health enthusiasts. After all, it has several advantages. Let’s explore them.

Apple cider vinegar is apple juice with a two-step fermentation procedure to transform into vinegar. Mashed apples are first combined with yeast and unrefined sugars to make alcohol. The alcohol is then fermented into acetic acid by the addition of microorganisms.

Acetic acid, the apple cider vinegar’s main active element, has a distinct odour and is well known for reducing belly fat and suppressing body fat buildup. The Latin word acetum, which means vinegar, is where the term “acetic” first appeared. 5-6% of apple cider vinegar is acetic acid. There is also water and little amounts of other acids, like malic acid.

For thousands of years, compounds containing vinegar were used for their alleged therapeutic benefits. For example, they were used as an antibiotic to boost strength, for “detoxification,” and even as a therapy for scurvy. However, apple cider vinegar has recently been acknowledged for weight loss. According to a study on the relationship between apple cider vinegar and weight loss, the acetic acid created during the beverage’s fermentation process can help reduce hunger and burn fat.

The following are some advantages of apple cider vinegar that make it excellent for weight loss:

Apple cider vinegar may help people consume fewer calories by encouraging satiety. One hour after eating, there is a 55% reduced blood sugar response when vinegar gets ingested with a high-carb meal. As a result, the rest of the day’s caloric intake decreases by 200–275 calories. In addition to lowering appetite, apple cider vinegar also slows the rate at which food leaves your stomach.

A tablespoon of apple cider vinegar provides just three calories, no fat, and little carbohydrate. Therefore, it doesn’t significantly increase the calories consumed when looking at the calorie-in, calorie-out relationship. Additionally, since there aren’t additives, you don’t need to watch out for too much sugar that could hinder your efforts to lose weight.

According to a study, acetic acid, which makes up the majority of this vinegar, prevents fat buildup. As a result, it lowers the chances of weight gain and may prevent the development of metabolic syndrome.

Apple cider vinegar’s main ingredient that gets ingested is acetic acid. To combat body fat, it speeds up your body’s metabolism. Its boosting metabolism and hunger-crushing ability are well-known for supporting weight loss.

What is the Recommended Amount of Apple Cider Vinegar?

If drinking vinegar makes you uneasy, consider incorporating it into your meals instead. For example, add a tablespoon of apple cider vinegar to your smoothie, or you can drizzle it over a salad or steamed vegetables.

Since apple cider vinegar has a high acidity level, you should always dilute it with water or have water right after drinking it to prevent enamel damage.

How Does Too Much Apple Cider Vinegar Affect You?

High intake or more than 2-tablespoons of apple cider vinegar daily for a longer duration can lead to several health complications.

Preparation time: 15 minutes (Prep time does not include refrigeration time.)

Health influencers vouch for the effectiveness of ACV in weight loss. However, it does not immediately promote weight loss. It must get paired with a calorie deficit diet or a weight loss-friendly diet to get the maximum results. What must be noted is that ACV might make you eat less. Including apple cider vinegar as a weight-loss drink is simple. Make sure to have a tablespoon of this beverage before breakfast. Be careful not to consume more than two tablespoons and remember to have it diluted.