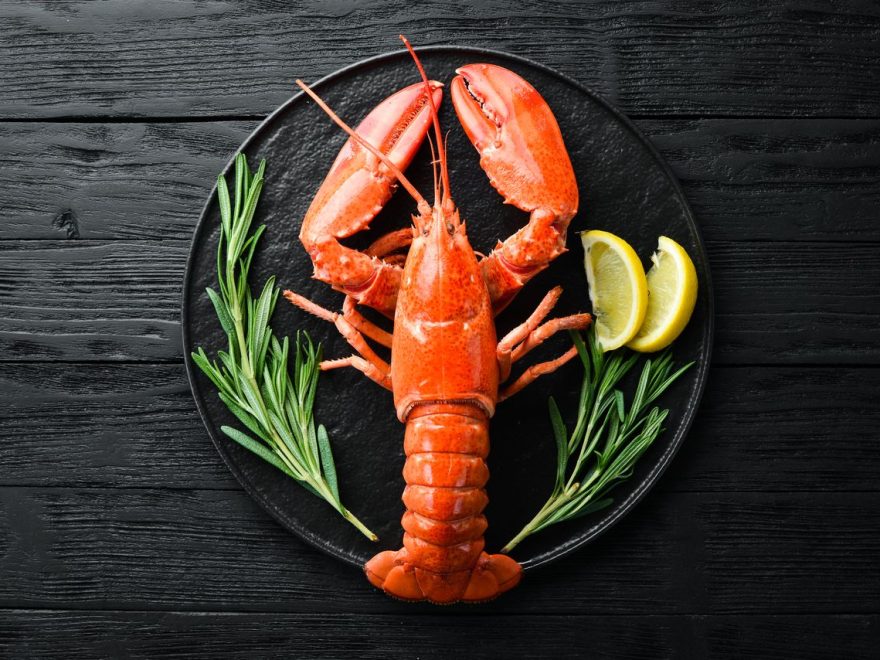 Lobster is a kind of shellfish that is usually boiled or steamed. One can eat it as a main meal, as a sandwich filler, or with rich dishes such as spaghetti, mashed potatoes, and cobb salad. However, due to the high expense of lobster, many individuals only eat it on special occasions.

Despite its desired status, lobster was not always associated with high prices. In the 17th century, colonists in Massachusetts saw lobster shells as a symbol of poverty and only served lobster to their workers. In the 1940s, canned lobster cost 11 cents per pound.

Lobster is a high-protein food that is low in calories and fat. Also, lobster is high in omega-3 fatty acids and low in mercury. So, in terms of safe, healthful seafood options, it’s great. The sole potential disadvantage is that lobster is rich in cholesterol, which is also a myth. However, this is not always an issue unless you are vulnerable to heart disease.

According to USDA, 100 g of cooked lobster contains-

Lobster is a high-quality lean protein source. Lobster, like other shellfish, is high in all essential amino acids, which are the building blocks of protein. Furthermore, research suggests that high-quality protein diets suppress appetite-stimulating hormones while boosting levels of hunger-reducing hormones.

As a result, eating protein may aid weight loss by increasing metabolism and decreasing appetite. Protein also aids in the growth and repair of cells in the bones, muscles, skin, hair, and nails.

Lobster is naturally low in carbs, sugar, and dietary fibre. The majority of the fat in Lobster comes from polyunsaturated fats. Lobster is a good source of vital omega-3 fatty acids, which the body cannot produce.

Lobster has a low saturated fat content by nature. Saturated fat-rich foods elevate blood cholesterol levels, increasing the risk of heart disease and stroke. As a result, consuming low-saturated-fat foods such as Lobster can help lower that risk. The cholesterol content in Lobster is high.

Lobster is high in copper and selenium. Copper aids in synthesising energy and DNA, while selenium is an anticancer agent. Furthermore, selenium boosts immunity and protects against neurodegenerative and autoimmune thyroid diseases.

Lobster is a high-protein, low-fat seafood with many omega-3 fatty acids. When your body processes proteins, it burns more calories than when it processes carbohydrates and fats. It also includes essential vitamins and minerals for good health. Lobster does not contain a substantial amount of saturated fat. Since Lobster is a marine animal, it contains sodium and mercury. So, consult your doctor before consuming seafood, and research the type and source to learn more about the mercury concentration.

Infection and pneumonia rates are greater when zinc levels are low. A 1-cup portion of lobster contains over 6 milligrams of zinc, accounting for 67% of the daily need for women and 56% for males.

Lowers the Risk of Prostate Cancer

Higher seafood consumption, such as lobster, is linked to a decreased risk of advanced prostate cancer, as per a Harvard study. This advantage is because of seafood’s high concentration of omega-3 fatty acids, EPA and DHA. Because our bodies cannot generate omega-3s, we must consume them from fish, nuts, and seeds.

Lobster is an excellent source of choline. Human studies demonstrate that pregnant women who ingest enough choline during their pregnancy boost their children’s memory performance in the long run.

Several animal studies have also proven the advantages of choline during pregnancy. So, 70.3 milligrams of choline is considered an appropriate dose during the second trimester of pregnancy, and 1 cup of lobster contains 26% of this amount.

Choline is vital not just for pregnant ladies but also for other older individuals. Choline consumption correlates with enhanced performance on verbal and visual memory tests and fewer signs of Alzheimer’s disease in older persons, as per a study.

DHA, also found in lobster, has been demonstrated to reduce cognitive deterioration. Eating lobster on occasion may assist older adults in maintaining their mental sharpness as they age.

Selenium has exhibited properties that make it an essential component of thyroid function, and it acts as an antioxidant and aids the thyroid in absorbing and metabolising hormones.

A meta-analysis found that patients with thyroid illness who are selenium-deficient benefit from increasing their selenium intake, including increased general wellness, mood, and thyroid function. Selenium is abundant in lobster.

One study shows that copper deficiency can cause anaemia. Anaemia is a low blood iron level; lobster contains copper that can help raise these levels.

People can heal their anaemia, or at least greatly ease their symptoms and boost their iron levels, by eating lobster, which is high in copper.

The protein and healthy fat composition of lobster can help reduce inflammation in the body. The omega-3 fatty acids in shellfish regulate cholesterol levels and enhance the molecules that defend the body, known as prostaglandins. Those suffering from arthritic symptoms may find alleviation. As per a study, mud lobsters can help in inflammatory linked ailments.

Lobster has a rich nutritional profile that provides several health benefits. Lobster nutrients may help with heart and brain health, diabetes, and weight loss. They might even assist in lowering the risk of certain cancers. Lobster is a high-protein food that aids digestion, regulates hormones, and aids cell formation during puberty. Furthermore, although Lobster includes a lot of cholesterol, dietary cholesterol does not appear to raise the risk of heart disease. As a result, most people do not have to worry about this.

Lobster with Spinach and Mushroom

For the Spinach and Mushrooms:

Lobsters and other shellfish contain a lot of sodium. Per 85 grams serving, lobster has roughly 13 milligrams of sodium. According to WHO, excessive sodium consumption can have several harmful consequences, including elevated blood pressure and an increased risk of stroke. Therefore, when cooking lobster or other seafood, try to maintain the salt to a minimum.

According to ACAAI, diarrhoea, vomiting, rashes, or swelling of the lips and tongue are all shellfish allergy symptoms. If you believe you have a shellfish allergy, consult an allergist for testing.

Lobster is a highly perishable item that you must hold carefully to avoid microbial infestation. Foodborne infections can occur as a result of improper handling. However, eating raw or undercooked lobster increases the risk of contracting a foodborne disease.

Having the bacterium that contaminates lobster can cause diarrhoea, nausea, vomiting, fever, stomach cramps, and headaches. As a result, per a study, it is advised to avoid eating raw lobster. Therefore, you should exercise caution when handling lobsters.

Like other exotic shellfish, lobsters might be prone to environmental risks such as biotoxins, heavy metals, and chemical contaminants. Always use fresh seafood from a reliable supplier when cooking and preserving lobster and follow food safety requirements.

Heavy metal consumption through food may harm your health, and a study shows its correlation to brain and kidney damage and cardiac problems in newborns.

The lobster is a protein-rich crustacean high in omega-3 fatty acids, vitamins, and minerals. Also, including it in your diet may aid weight reduction and mental health, as well as lessen the risk of heart disease and cancer.

Lobsters, on the other hand, are highly allergenic, and they might potentially get polluted with pathogenic bacteria or heavy metals. Therefore, more sensitive individuals, such as pregnant women, should reduce their consumption. To avoid bacterial infection, only consume fresh and thoroughly cooked lobsters.

Q. Is lobster as healthy as fish?

A. Lobsters and other crustaceans like shrimp and crab all contain higher protein content than finfish, which are customarily called fish. Lobsters also have zinc, selenium, omega-3, choline and healthy fat, all of which have health benefits.

Q. Is lobster healthier than chicken?

Q. Is lobster healthier than shrimp?

A. As per given data in USDA, shrimp has more protein and less fat than lobster. Also, lobster has fewer calories than shrimp. For example, 200 g of shrimp can give you 85 calories, whereas lobster can provide 77 calories. Calcium and sodium are in high quantities in lobster. However, omega-3 is highly available in shrimp, crab and crayfish rather than lobster.

Q. Is lobster high in cholesterol?

A. Lobsters are high in HDL, sometimes known as “good” cholesterol. Shellfish, such as lobster and king crab, have no more cholesterol — and in many cases, less than skinless white meat chicken and lean beef (around 60 mg per 85 g serving). In addition, shellfish have the lowest fat content of any shellfish, particularly lobster, which has less than a gram of fat in three-ounce (85 g).

Q. Can you eat lobster every day?

A. Lobster is a high-protein food that contains various vitamins and minerals. And because it’s low in saturated fat and harmful cholesterol, you may eat it up to two or three times a week if your budget allows.

Q. Is lobster a healthy food?

A. The lobster is a high-protein crustacean that is also abundant in omega-3 fatty acids, vitamins, and minerals. It also has significantly less fat and bad cholesterol. Therefore, its inclusion in your diet may help with weight loss and mental wellness and reduce the risk of heart disease and cancer.

A. Lobster is low in fat; however, the fat it does contain is ‘healthy’ fat. It will aid in reducing inflammation in the body and creating prostaglandins, suitable for people suffering from diseases from arthritis to circulation issues.

Q. When should you not eat lobster?

A. If you have a shellfish allergy, avoid eating lobster. Lobster has a considerable amount of mercury and does not consume it more than six times per month. Women, in particular, should limit their consumption of possibly high-mercury foods during pregnancy.

Q. What happens if you eat too much lobster?

A. Normally, lobster prices are way too high that people can not generally consume it regularly. Even if someone consumes two to three servings a week, as per nutritionists, it is acceptable for the body as lobster has many health benefits and less mercury, fat and cholesterol. If you have allergies to seafood or shellfish, you may start showing symptoms. In that case, take your prescribed medicine or immediately see a doctor and follow all the guidelines while buying and storing lobster.

Q. Is lobster good for kidneys?

A. To have a healthy kidney diet, you should eat lower phosphorus food. Lobster has 185 mg phosphorus in 100 g serving. Also, it’s rich in protein, omega-3 fatty acids and less cholesterol which can give you a good renal diet. Be cautious of metal contamination in shellfish and other seafood since heavy metal ingestion through food may be damaging to your health. It can lead to kidney and brain damage.

Q. Is lobster high in mercury?

A. Since lobster is a low mercury seafood alternative, the key safety concern is that you should adequately keep, handle, and thoroughly cook it. It holds fresh and frozen lobster at home or in a restaurant.