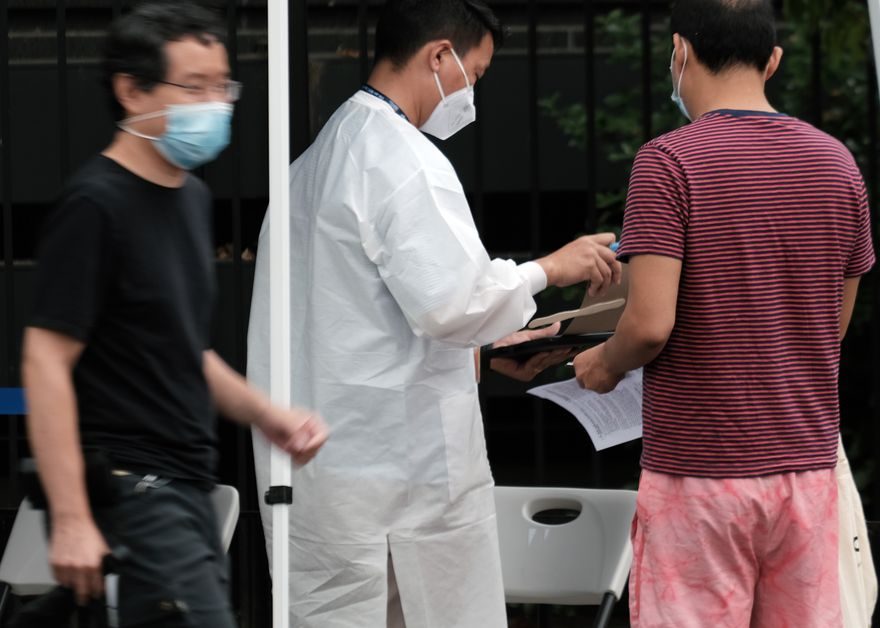 After two years of COVID-19, the conversation around monkeypox testing gives off an unnerving sense of deja-vu. The similarities are right there: painful swabs, the struggle to even find a test, bottlenecks, and a long wait for results. But the diseases are different enough that experience with COVID-19 didn’t give researchers much of a leg up in their efforts to improve the monkeypox testing process.

In the early days of the COVID-19 pandemic, experts bemoaned the lack of investment in rapid, at-home testing for various diseases in the United States. The thought was that if the infrastructure had been in place before the coronavirus emerged, it would have been easier to scale up testing — and maybe help control the pandemic. Eventually, that scale-up happened anyway. Money and resources flooded into testing projects, and soon, at-home COVID-19 tests became ubiquitous. That experience was supposed to set the stage for a future with easy access to home tests for any number of diseases once they popped onto the scene.

Against that backdrop, it would seem that monkeypox might offer a perfect test case. It’s an unfamiliar disease spreading rapidly, and there’s high demand for tests. But monkeypox isn’t the best benchmark for whether that future is going to materialize, says Ben Pinsky, the medical co-director for point of care testing at Stanford Health Care. “It’s a different enough infection,” he says.

Monkeypox isn’t a respiratory disease like COVID-19, where the nose and mouth are the clear targets — both for the virus and for testing. Monkeypox’s telltale signs are painful, blister-like sores, and it can come with other symptoms like fever and muscle aches. Right now, monkeypox tests involve swabbing the sores that appear over the course of an infection. There aren’t at-home tests for other lesions — like herpes, for example, Pinsky says. There is still a lot of work to do to figure out if people are able to successfully swab their own lesions, which could be painful or difficult, he says.

The reliance on lesions means that patients can only be tested once the telltale signs of the disease appear — which is a sign they probably should be isolated from others anyway. Someone who was exposed to monkeypox and has a fever but no lesions wouldn’t be able to take a test. People can test for COVID-19, on the other hand, without waiting for any specific symptoms to appear. “I’m a strong advocate for home testing of diseases, but you have to have the right sample at the right time, and we aren’t there yet,” says Paul Yager, a professor in the department of bioengineering at the University of Washington, in an email to The Verge.

It might be possible to test for monkeypox through saliva or semen, according to one small study of 12 patients done in June. And some companies are working on tests that don’t involve lesions at all. A California-based company, Flow Health, developed a saliva-based molecular test for monkeypox, which asks people to spit in a tube and then send in the sample for PCR testing.

The test is not authorized or approved by the Food and Drug Administration. It’s offered through a program that lets certified labs develop and run their own in-house tests without going through the normal regulatory process. Right now, the FDA still says monkeypox tests should be run on lesions. The company is sharing its saliva test data with the FDA as the agency checks to see if it should update its guidance, Flow Health CEO Alex Meshkin told The Verge.

There’s still a lot of work to do in order to figure out how and when the monkeypox virus shows up in different parts of the body over the course of the disease, which will influence how effective and accurate tests that don’t use lesions might be. If the monkeypox virus shows up in saliva before lesions develop, for example, then a saliva-based test could help flag the disease early on. But if it doesn’t, that type of test might not be as useful. Meshkin says Flow Health has tested someone who closely interacted with monkeypox patients but didn’t yet have lesions and that the tests of that person came up positive. It’ll take testing more patients, though, to know for sure when and how the virus shows up.

Along with the science being different, the regulatory and political landscape around monkeypox also breaks from COVID-19. At the moment, monkeypox hasn’t been declared a federal public health emergency in the United States. That changes the way various groups might go about developing tests. Right now, COVID-19 at-home tests are primarily available under emergency use authorizations — an accelerated process that lets tests come to market more quickly during an emergency. Meshkin says Flow Health is prepared to file for an emergency use authorization if a public health emergency is declared, which reports say could come this week.

Without the emergency authorization, companies that do home testing aren’t able to take some of the same steps that they did during the early stages of the COVID-19 pandemic. They also can’t take the approach of Flow Health, which doesn’t need FDA signoff to run saliva tests at its lab. An at-home test, by definition, doesn’t use a lab to start diagnosing patients. Those factors may contribute to why many rapid testing platforms that sprang up in response to COVID-19 didn’t pivot straight to monkeypox. Cue Health, which has a rapid molecular COVID-19 test, is working on a “variety of diagnostics tests” but didn’t specify which they were, spokesperson Shannon Olivas said in an email to The Verge. Detect, which also has a rapid molecular COVID-19 test, said it’s in the “concept phase” for a monkeypox test, chief technology officer Eric Kauderer-Abrams said in an email to The Verge.

Those are all reasons why monkeypox testing takes more work than building directly on the COVID-19 experience. But they aren’t excuses. The health system could still have been far better prepared for this particular outbreak. The disease has been common in Africa for years, but global public health has largely failed to devote resources to understanding and preventing it. A Nigerian doctor who tried to raise alarms about the disease in 2017 wasn’t taken seriously by officials and the international medical community. If there’d been more attention to the disease over the past few years, infectious disease experts might have a better understanding of how the virus affects the body — giving them the type of information they’d need to develop easier home tests more quickly.

Even if we set aside home testing and the logistical differences between the two diseases, you’d think that, after two years of a brutal pandemic, the US would have learned how urgent testing can be to get a handle on an infectious disease outbreak. There’s still more demand for testing than there are tests available, and some people who suspect they have the disease are being dismissed by doctors while they struggle to manage painful symptoms. Unlike the start of the COVID-19 pandemic, monkeypox is a known disease with existing tests, treatments, and vaccines, but the sluggish response to US outbreaks shows just how few lessons the public health system has learned — even after a two-year crash course in how disease can disrupt the world.