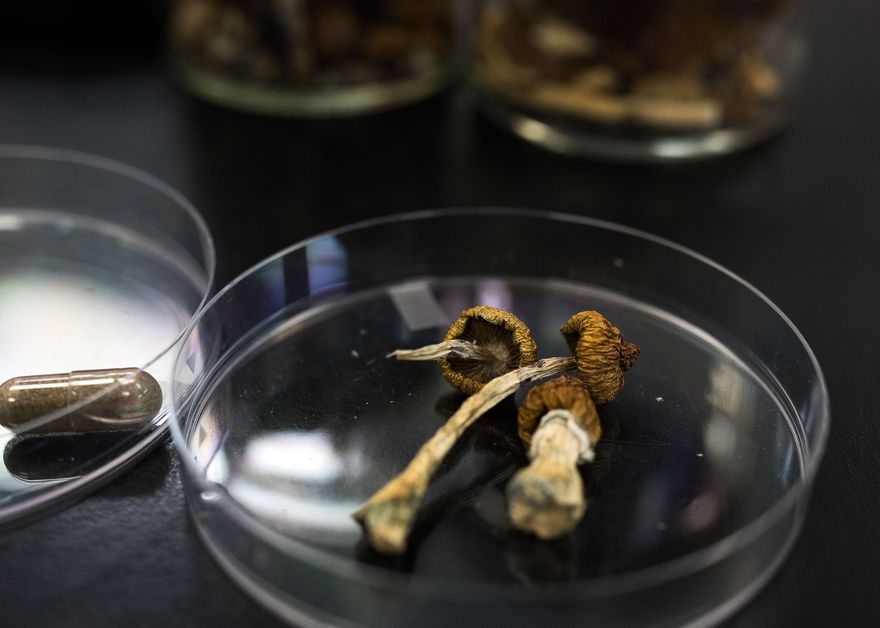 A combination of psychedelics and therapy appears to help people with alcoholism cut down on the number of days per month they drink heavily, according to a new study. Researchers used psilocybin, the psychedelic compound found in magic mushrooms, to treat patients over eight months and saw a dramatic improvement in participants’ drinking habits.

“I’d say it saved my life,” study participant Jon Kostas, who took psilocybin as part of the trial, said during a press briefing. He’d tried Alcoholics Anonymous meetings, rehab, different specialists — nothing helped. “This eliminated all my cravings to the point where it cured my alcoholism. And I don’t categorize myself as an alcoholic anymore.”

Using psychedelics as treatments for alcoholism was a popular idea in the 1960s and 1970s, and studies on LSD found that it reduced alcohol misuse. But the approach went quiet in the decades after, according to an editorial published in the journal JAMA Psychiatry alongside the new study.

The new research marks a “rekindling of interest,” the authors of the editorial wrote. The study included 93 people with alcohol dependence. In the 12 weeks leading up to the study, the participants drank alcohol an average of around 60 days. Of those 60 drinking days, about half were heavy drinking days — defined as five or more drinks a day for a man and four or more drinks in a day for a woman.

The new research marks a “rekindling of interest”

People in the trial were randomly assigned to either take a capsule of psilocybin or an antihistamine twice over the course of the 36-week-long study. They had four sessions with therapists before the first time they took the drug, four sessions between the two drug doses, and four sessions after the second drug dose.

The effects lasted for months after the second dose of the psilocybin, study author Michael Bogenschutz, a psychiatrist and director of the NYU Langone Center for Psychedelic Medicine, stressed during a press briefing. “This suggests that psilocybin is treating the underlying disorder of alcohol addiction rather than merely treating symptoms,” he said.

People who took psilocybin described having intense experiences and were able to guess correctly that they were on it. The drug was safe, though, the authors said, and only caused some mild side effects like headache and nausea. But it was safe in the context of this study, the authors noted — where participants were carefully screened and monitored throughout the time they spent on the drug. People with other underlying psychiatric conditions or in a less controlled environment might have a different experience with it.

It’s not clear why psychedelics might help people drink less

The combination of the psilocybin with therapy is key to the treatment approach, and the team can’t say what the effects of the psychedelics would be on their own. And it’s still not clear why or how the combination might help people drink less. The drugs might help the brain more easily change and grow in areas that could affect thought and behavior — which could make people more open and receptive to therapy, Bogenschutz speculated. The experience of going on a hallucinogenic trip might play a role as well, though experts still don’t know if the hallucinogenic part is necessary for the full effect or if the drug could still work even if people don’t have a trip.

“We just need to start doing some mechanistic studies to find out what actually is going on. And the truth is, we don’t know,” he said.

There still needs to be a lot more research before psychedelic drugs can be used to treat alcoholism. But the results from this study are similar to those from the research on LSD decades ago. Together, they show the potential for hallucinogens in this area — and that it deserves more research attention to figure out how it can help. “If these effects hold up in future trials, psilocybin will be a real breakthrough in the treatment of alcohol use disorder,” Bogenschutz said.