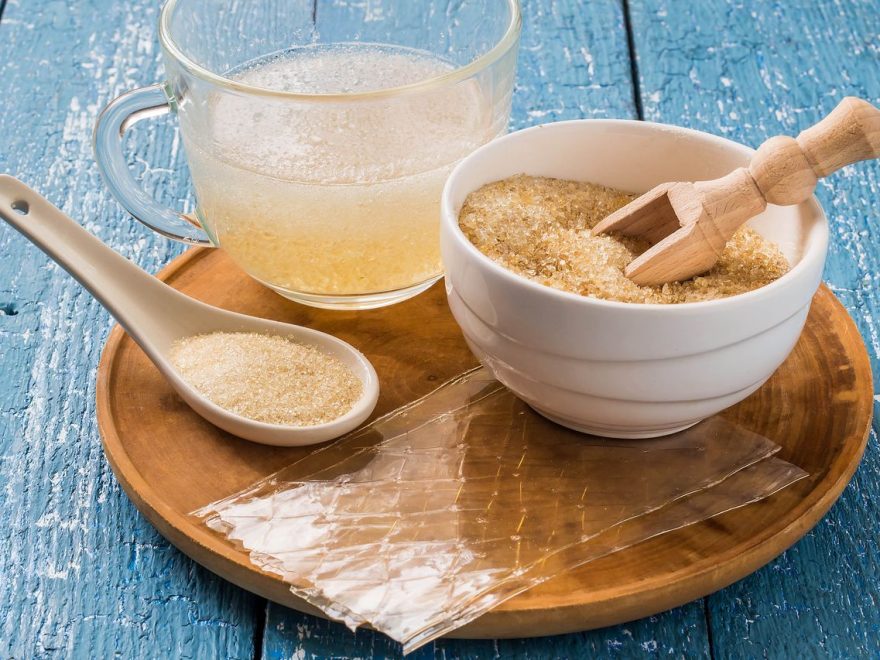 Gelatin or gelatine (Latin: Gelatus meaning “frozen” or “stiff”) is a protein obtained from collagen. The colourless and flavourless protein is multifunctional. It’s colourless and flavourless. Gelatin originated from the tendons, ligaments, and boiling skin of the animals like cows and pigs. It can be in powdered form, tablets, and even granules. Chemically gelatin is a hydrolysed form of collagen, where after hydrolysis, smaller peptides form.

Gelatin is an animal-based thickening or gelling agent. Collagen is a protein abundantly found in the connective tissues, bones, muscles, skin, cartilages, and blood and is responsible for skin stretchiness. Therefore, the collagen in the gelatin boosts our collagen levels, leading to healthy skin and bones. Especially at old age, taking more collagen-containing food items as the level of collagen drops leads to loose and wrinkled skins with less skin stretchiness.

As per the USDA, 100g of Gelatin holds the following properties:

Collagen, as we all know, is a protein that builds up our skin, hydrates it, and gives it a healthy sheen. Besides skin health, a healthy collagen level is essential for the bones. It aids in the rise of bone density, i.e., the amount of calcium and phosphorus in the body. Low bone density can result in frail bones, severe fractures, and bone damage, leading to osteoporosis or when a bone becomes weak and brittle.

Gelatine contains Lysine, a bone-strengthening amino acid. It also aids in absorbing calcium, which is essential for bone health. It has some regenerative (bone formation) and preventative properties (reducing bone damage).

In the cosmetics sector, gelatin gets produced in large quantities. It’s because of “high biocompatibility, biodegradability, and mild antigenicity,” according to research. The abundant protein source, which provides the building block amino acid, aids the human body in producing collagen and protecting the skin.

Face creams, shampoos, sunscreen, and body lotions use gelatin as a gelling ingredient. Fish gelatin, also known as hydrolysate, is a common ingredient in cosmetics. It’s found in skin treatments to help prevent water loss via the epidermis (amount of water that evaporates through the skin to the environment). Fish gelatin has boosted the skin’s water-binding capacity (ability to absorb and hold water).

Its usage in the food business is widely popular due to its “melt in mouth” quality. It’s often used in dairy products since it increases emulsifying properties. It’s also used in the meat business to ensure a pleasant feel and texture. The amount of it used varies depending on the product. The finest part is that it is easily digested and broken down into parts that the human body can simply absorb.

Gelatin also aids gut health by transporting liquid through the intestines. The protective layer it produces in the inner lining of the digestive tract, which has a relaxing effect, is one of the key benefits. In addition, studies suggest it also decreases the proinflammatory effects of lipopolysaccharide in intestinal cells.

Studies have proven gelatin gives a feeling of fullness or suppresses hunger if used over a period of time. Thereby it helps in assisting weight loss. Also, it might help the patients suffering from obesity manage or reduce weight.

Gelatin’s high amount of amino acids and peptides boost HGH generation (human growth hormone). As a result, it could help to speed up the metabolism.

Research indicates gelatin Hydrolysate (GH), which is made from fish skin and contains bioactive peptides. These are good antioxidatives for the human body. Therefore, it may lower the chances of developing serious illnesses. In addition, it aids in reducing oxidative stress and lowering the risk of cardiovascular disease, diabetes, and age-related disorders, among other things.

It’s a frequent ingredient in a variety of pharmaceuticals, including

Allergic responses to gelatin are common. Triggers include vaccines (MMR, Varicella, Zoster), hemostatic agents (Floseal, Gelfoam, Surgifoam), IV colloids, and medicine capsules (Advil Liqui-gels), and other surgical equipment. Anaphylaxis was the most prevalent complication, with deaths. However, certain patients have previously tolerated the gelatin in the form of Jell-O, certain yoghurts, pig, other meats, and vaccinations.

In the past, MMR vaccine reactions were thought to be egg allergies. However, researchers subsequently discovered that it was gelatin. Vaccines with added gelatin have better heat stability, allowing them to get distributed in underprivileged places. Its usage is also common in Flumist, MMR, rabies vaccinations, varicella, yellow fever, zoster (Zostavax), and oral typhoid vaccines. It’s vital to double-check vaccination prescribing instructions because some vaccinations contain gelatin and others don’t. Vaccination components may also differ from year to year.

Gelatin remained an underappreciated component in the healthcare system in 2019, and monitoring is essential if a patient is allergic to it. To help diagnose it, an allergist can administer allergy IgE testing.

Among the various animal sources are bovine, porcine (possibly further split into organic grass-fed type or not), poultry, and marine gelatin. The most widely available are bovine and porcine.

Based on Manufacturing Process

Based on Structural Appearance (Powder, Granular and Sheets)

Powder, granular, and sheet forms are all available (leaves). The coarse or powdered variants can be added to cuisine, blended with other ingredients, or used independently. Soak the sheets or leaves in cold water before using them, and cooks can slice them into little pieces. It softens after a few minutes of soaking, wringing out, and melting with warm liquid. Sheets, commonly found in hotels and restaurants, are simple to manage for cooks because they do not require weighing.

The former, often known as plain gelatin, is the purest form of gelatin, whereas the latter may include sugar, artificial flavours, colours, and other additives.

Ways to Use Gelatine

Gelatin falls under edible, medicinal, photographic, or industrial grade categories depending on its intended use.

There are Two Types of Gelatin, (1) gelling and (2) non-gelling. They are also known as hydrolysed gelatin (non-gelling) and food-grade gelatin (gelling). The difference between the two items is that they’re processed differently, resulting in powders with variable molecular and structural sizes, allowing them to target different parts of the body.

Food-grade gelatin can be used in cooking since it thickens and settles the contents. Widely used in jellies, tasty snacks, delicious cheesecakes, sauces, soups, desserts, and everything else you can think of in the kitchen. Food-grade gelatin is a gelling powder that aids in the thickening of foods.

Collagen has been hydrolysed and reduced to very tiny particle size, making it readily available to the body. It gets directly absorbed through the small intestine into the bloodstream.

When animal elements arrive at a meal’s processing plant, there are initial checks for quality. Next, the rotting parts or unacceptable parts get discarded. The bone, tissue, and skin are then credited into a shredder to be reduced into small portions approximately 5 inches in diameter.

Initially, animal elements are subjected to strong water jets to clean away dust and dirt. They are then soaked in warm water to reduce the fat content to 2%. Next, a conveyor belt shifts the bones and skins to the commercial dryer, wherein they get roasted for a half-hour at approximately 200 °F (100 °C).

For approximately five days, the animal elements get soaked in lime or different acids or alkalis. This assists in eliminating the maximum of the minerals and enables microorganism collagen. The process uses Hydrochloric acid with a pH under 1.5. Alkaline washes are potassium or sodium carbonate with a pH above 7.

The liquid is surpassed via filters from the extractor to discard any last portions of bone, tissue, or pores and skin. The liquid is transported to the evaporator from the filters, separating the liquid from the strong gelatin. Gelatin gets pressed into sheets and further decreased to a quality powder.

A predestined amount of ingredients or elements get blended into the gelatin powder at this stage. Gelatin is popular in the Flavouring Industry as sweeteners, flavourings, gelling agents, etc.

The packing system is automated, with a specific quantity of gelatin being poured into packets to allow the gelatin to circulate inside the pack. And then vacuum sealed.

Note: Do not add too much gelatin as it will spoil the texture and make it hard. And will spoil the taste of the pudding. Also, limit the usage of artificial colourings.

Gelatine is utilised everywhere and has several advantages. Therefore, the term “multifunctional” is justified. It is widely used and accepted in the food and cosmetics industries. You can find gelatin in your favourite foods, cosmetics and medicines. Gelatin can be beneficial, but be mindful of the potential adverse effects, such as allergies.

Q. What is Gelatin made of?

A. Gelatin is made by the processing of animal bones, cartilage, and skin. They may, for example, employ the bodies of cows or fish. The process extracts collagen, a fibrous protein that connects muscles, bones, and skin, turning it into gelatin, a flavourless, jelly-like substance.  The hides and bones of certain animals, most commonly cows and pigs, are boiled, dried, treated with a strong acid or base, and then filtered to remove the collagen.

A. Gelatin is a substance derived from animals. It comes from animal components like pigskin, bovine skins, and cattle bones. Gelatine-based foods are not considered vegetarian. Agar-agar, vegetable gums, and pectin can be used instead of gelatin.

Q. What is Gelatin used for?

A. Gelatin is a protein derived from the collagen of animals, most often cows and pigs. Capsules, cosmetics, ointments, and meals are all made with it. Collagen is a protein found in cartilage, bone, and skin. The production of collagen in the body increases with gelatine. Therefore, there is interest in using gelatin for several other purposes. However, not much evidence exists to determine whether it might be helpful.

Q. What can be substituted for gelatine?

A. Agar-Agar is an excellent substitute for gelatine. Flaked or powdered, this flavourless ingredient is made from boiled and pressed seaweed. Unlike gelatine, agar-agar is slightly different; you can add it to foods after boiling in little water (1:1 ratio). As a result, Agar-agar sets in about an hour. It does not require refrigeration to set.

Q. Is Agar-Agar same as Gelatin?

A. Agar-agar is an algae-derived substance. It can be used as a vegan gelatin alternative. Agar-agar resembles gelatin in appearance and function but develops without using animal products. Also, Agar-agar is vegan/vegetarian, whereas gelatin is a non-vegetarian product, making it ideal for vegetarians to prepare for any home cook or baker.

Q. Is there gelatin in Marshmallows?

Q. Is there Gelatine in Jell-O?

A. Yes! Gelatine is common gelling agent. Gelatin is the main component of jello. Animal collagen, which makes up connective tissues like skin, tendons, ligaments, and bones, is used to manufacture gelatin. It comes from pigskin. Not only jell-O but gummy bears, jelly, and marshmallows comprise gelatine.

Q. Is Gelatine a complete protein?

A. Gelatin is an incomplete protein since it lacks the necessary amino acid tryptophan and has low levels of other amino acids such as methionine and histidine. As a result, it cannot replace or build tissues or bones. Therefore, it is not a complete protein.

Q. Is Gelatine same as Collagen?

A. Gelatin is a form of collagen; however, it is its degraded form (partially hydrolysed form). As a result, their nutritional profiles are nearly identical, and they may benefit joint, skin, stomach, hair, and bone health. However, due to variances in their chemical structure, they get recruited for different purposes.

A. Weight loss may be aided by gelatin. It helps to reduce hunger and promote feelings of fullness while being low in calories. Incorporating it into your balanced diet might assist in reducing weight.