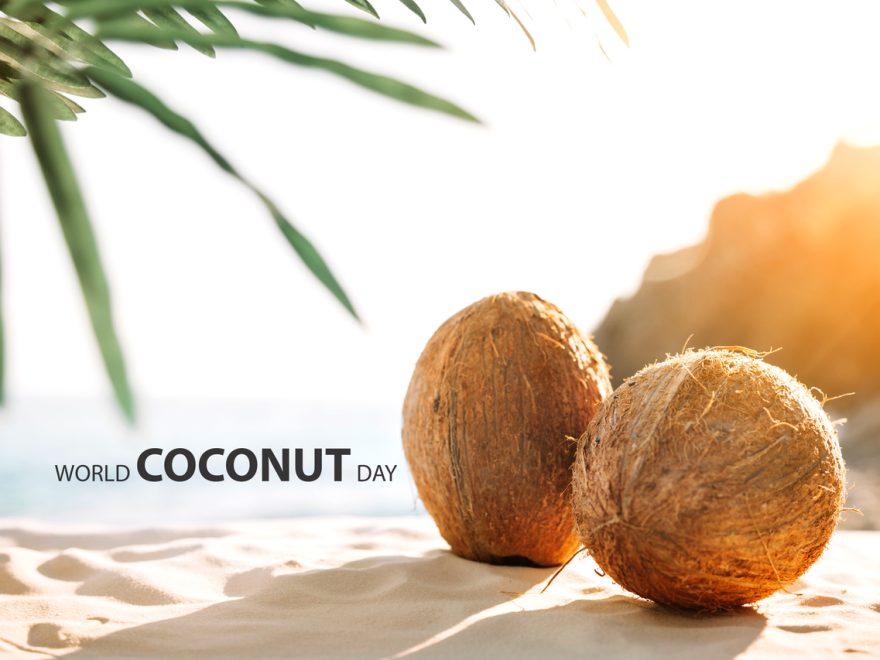 The world celebrates Coconut Day on September 2nd. The coconut plant is one of nature’s most versatile products. There are so many amazing uses for coconuts: making curries with coconut milk and coconut cream, drinking coconut water or milk, using coconut oil for cooking, coconut butter for snacks, adding it to alcoholic drinks (pina colada), tropical smoothies, adding coconut milk or oil to your morning coffee, skincare and hair and body care and so much more.

The first celebration of World Coconut Day was in 2009.

What is a coconut? Is it a fruit, nut, or seed? Botanically speaking, a coconut is a fibrous one-seeded drupe, also known as a dry drupe. However, the coconut can be all three: a fruit, a nut, and a seed. The coconut purchased in the store doesn’t resemble the coconut found growing on a coconut palm. An untouched coconut has three layers. The outermost layer is called the exocarp. It is usually green in color. The next layer is the fibrous husk, or mesocarp, which surrounds the hard woody layer called the endocarp. The endocarp surrounds the seed.

hydration when an intravenous solution was in short supply

There are many health benefits of consuming coconut oil, milk, cream, coconut butter, and water.

Coconut oil is made by pressing dried coconut meat to make milk, and then the oil is extracted from the milk. It has a firm texture at cool temperatures and becomes a liquid during warmer temperatures. There is a lot of confusion regarding the health benefits of coconut oil as it is saturated fat. The American Heart Association (AHA) recommends consuming 30 grams of coconut oil daily for men and 20 grams for women. The AHA points out that we don’t need to avoid saturated fats completely as they help support our immune function and reduce Inflammation.

Contrary to its name, coconut milk doesn’t have any dairy in it at all. It’s a liquid that is found inside mature coconuts. Coconut cream is full-fat coconut milk stored within the white, hard coconut “meat.”

Coconut butter comes from coconut meat. It has a nut-butter-like consistency. Coconut Butter is considered a superfood. Coconut butter has the same health benefits as coconut oil and some additional ones. It may help with weight loss, can also boost athletic performance, supports your immune system, and is high in fiber. Coconut butter, just like coconut oil, contains medium-chain fatty triglycerides but also has some fiber.

A 33-gram serving of coconut butter contains the following:

Some fun activities you can do to celebrate World Coconut Day

There are many options. How about trying a new coconut curry, coconut shrimp

or coconut dessert or a tropical smoothie?

Have a fun party with your friends and family and crack some coconuts. Mix some fun new drinks using coconuts.

If you can plan a fun trip to the nearby tropical getaway and enjoy world coconut day with the coconuts.

So, how are you going to celebrate this coconut day? Lets us know in the comments below!